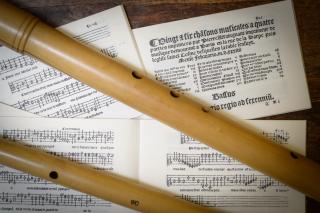 The Renaissance Workshop Summer School 2019 will take place in the historic town of Wolfenbüttel, home to Michael Praetorius, Johann Rosenmüller, Johann Theile, Gregorius Huwet,  visited by almost everybody who was involved with music in the 16th - 18th century, since it was a most important art loving court. Today it is known for the Herzog-August-Bibliothek, one of the greatest libraries in the world. The churches were Praetorius and Rosenmüller worked and are buried still stand and the town is absolutely charming, nothing more then a short walk away.

The first collections of consort music printed in France were by Pierre Attaignant and Jacques Moderne, whose 'Musicque de Joye' included pieces from a Venetian collection. Moderne was an Italian who trained in Venice and later moved to Lyon. In the same period a family of recorder and flute builders named Rafi/Raffin/Raffy was active. They made wonderful instruments with a large range, quite different from other traditions.

We shall focus on the 'Musicque de Joye' published by Jacques Moderne in Lyon, on Consort-Music by Attaignant for flute or recorders, on the Fantasies by Eustache de Caurroy for 3-6 parts and on the wonderful lute music from the period.

For viol players we have three high-pitch Renaissance viols (tenor and two basses) build by Josef Huber available during the workshop. If you don't have a Renaissance instrument or if you see a problem tuning up yours, we can provide one for you.

The teachers are all old friends who have been doing workshops or summer school classes with us in the past years:

Amanda studied at The Hague and is performing with many international Early Music ensembles like the Attaingnant Consort together with her former teacher Kate Clark.

Michael specializes in consort and ensemble playing and is frequently invited to teach at conservatories, universities and festivals. He travels with his large set of 17 matched recorders, so that partisipants can experience music making without any tuning problems. He also plays Renaissance and Baroque flute and does programs with contemporary music.

studied in Vienna and Graz and at masterclasses with Jordi Savall and Wieland Kuijken. She performs regularly with Le Concert des Nations, Hesperion XXI, Armonico Tributo Austria and the viol ensemble Almayne. She is know as a teacher, coaching consorts and introducing young people to the viol. Together with her husband she runs Oriana Music, a publisher specializing in music for viols.

The Fantasies by Eustache de Caurroy for 3-6 parts are an important collection of French viol music from this period.

Lukas is the founder of musica memo and has just released his first solo CD 'Bella incognita' - The imagination of Marco dall'Aquila' on the Glossa label. Recently he toured and recorded with the Ensemble Graindelavoix. He tought at our Renaissance & Baroque Workshops for the past two years.

We work at the high Renaissance pitch of 460 Hz. Recorders and flutes can be provided. Viols might want to use thinner strings for the two top cources and lutes can be played with a capo on the first fret. If you don't have a Renaissance viol but like to partisipate, we usually can arrange to have an instrument for you. The best size for this kind of music is the tenor viol.

The workshop starts with a reception at 4:00 pm on Saturday 8 August at the Prinzenpalais, followed by a guided tour through town and some music making in the evening. We'll point out the locations were the classes will take place. Besides the Prinzenpalais this is the Villa Seeliger used by the Landesmusikakademie Niedersachsen. It's a 5-10 minute walk between these locations. The Prinzenpalais has no weelchair access. If you have special needs, please tell us before you register and we see how we can accommodate you.

Price: the Baroque Workshop Summer School is € 480,- for the week. Active participants only. The is no such thing as 'just sitting in as a listener'.

Staying there: There is a Jugendgästehaus, a Bundesakademie, many hotels, holiday apartments and a campground. Please arrange for your own housing according to your needs and budget. Jugendgästehaus is very nice and close to the Villa Seeliger and the Rosenmüller church, the Hotel Bayrischer Hof is the most central, the Park Hotel the most fancy.... your choice...