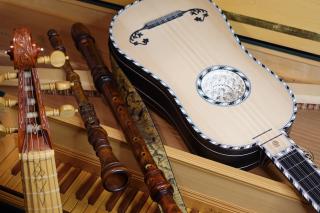 French style - Versailles and its influence on Europe

The Baroque Workshop Summer School 2023 will take place in the historic town of Wolfenbüttel, home to Michael Praetorius and Johann Rosenmüller. Also Johann Theile, Reinhard Keiser, Johann Adolf Hasse, Carl Heinrich Graun, Wilhelm Friedemann Bach and many other great composers were linked to this most important art loving court. Today it is known for the Herzog-August-Bibliothek, one of the greatest libraries in the world. The churches were Praetorius and  Rosenmüller worked and are buried still stand and the town is absolutely charming, nothing more then a short walk away.

This Summer School is dedicated to ensemble playing. Viol Consort and Wind Band in the morning. Big orchestra and chamber music in the afternoon.

Lully's orchestra was build from violins and viols of all sizes, theorbos, guitars, flutes, recorders, oboes and bassoons. For court entertainments the musicians played in the palaces, the gardens and for opera performances. We have selected a wide range of pieces including the famous 'Chaconne' and the 'Marche pour la Cérémonie des Turcs' from 'Le Bourgeois Gentilhomme', the 'Passacaille' and the 'Sarabande' from 'Armide' and the all time favorite 'Les folies d'Espagne'.

We work at the modern neo-baroque standard pitch of 415 Hz, since most woodwind players will have instruments at this pitch, even though it is quite different from French pitch. In Versailles the chamber-pitch was around 400 Hz and the opera-pitch somewhat below 390 Hz.

For wind players in the last third of the 17th century the 'modern' French woodwinds arrived in Germany and England. There is a lot of good oboe-band and theatre music! Flute players with Hotteterre flutes at 392 Hz or later flutes at 400 Hz can bring them too for the morning classes.

The viol consort will look at Charpentier, Du Mont, Moulinie, Purcell, Locke. We do have a nice consort of Henry Jaye viol copies for players from abroad who don't want to fly with their instruments.

The harpsichord class has fantastic repertoire to study, L. Couperin, D'Anglebert and Froberger being the biggest names. Harpsichord players will work on solo repertoire or work with winds and viols on chamber music.

Registration ends on 15 June 2023 but we work on a first come first serve basis. The number of participants is limited to six per class. Please sign up early. It helps us a lot with the planing ...

Each class needs four participants to make it happen, the maximum number is six. This is to ensure intense work. We reserve the right to cancel the class if there aren't enough registrations. In this case the full amount will be refunded. Participants can cancel until 30 June 2022 and get a refund. If you have to cancel thereafter, you are free to send somebody else to take your spot and replace you but we can't pay you back.

The workshop starts with a reception at 4:00 pm on Saturday 12 August at the Prinzenpalais, and some ensemble playing with everybody. There will be a guided tour through town at some point. Visits to the famous Herzog-August library and the Palace Museum should be arranged during lunch breaks. The Prinzenpalais has no weelchair access. If you have special needs, please tell us before you register and we see how we can accommodate you. Classes are 10:00 am - 1:30 pm and 3:00 - 6:00 pm. The Summer School ends with a final concert at 11:00 am on Saturday 19 August.

Price: the Baroque Workshop Summer School is € 630,- for the eight days. Active participants only. There is no such thing as 'just sitting in as a listener'. Guest are welcome to the final concert.

Sign up: your are registered after we received your registration form and your money transfer. We follow strict Covid rules and take just vaccinated musicians as participants for the Summer School. [We had transplant patients whose immune system is compromised and we don't want to put anybody at risk. Also wind instruments might be played by more than on player. Let's stay safe as long as the virus is around.] Please include a scan of your status with the application.

Getting there: Wolfenbüttel is a 10 minutes train ride south of Braunschweig. If you fly into Berlin it takes about two hours to get there, from Hannover it's just an hour.

Staying there: There is a Jugendgästehaus, a Bundesakademie, many hotels, holiday apartments and a campground. Please arrange for your own housing according to your needs and budget. Jugendgästehaus is very nice and close to the Villa Seeliger and the Rosenmüller church, the Hotel Bayrischer Hof is the most central, the Park Hotel the most fancy.... your choice....